Guest Post by Tanzanian Entrepreneur Mbwana Alliy, and Associate at i/o Ventures, a silicon valley based angel investment firm that focuses heavily on mentorship. He splits his time between East Africa and Silicon Valley.

Just returned from Pivot25 conference in Nairobi, by most measures, the event was a resounding success. Good write-ups and coverage about the event can be seen from Erik Hersman and other afrinnovator posts.

I wanted this post to focus on putting the Pivot25 event in global context and to address the progress and challenges that face the East Africa ICT Ecosystem – events such as pivot25 are great because they draw out the key players in the industry from journalists, developers, students, investors, Government and multinational corporations. Each of these players have a unique role to play in developing the ICT sector. In addition to who I met at Pivot25, late last year, I got a chance to bring in i/o Ventures Silicon Valley delegation as well as talk with the Kenya ICT board – this time I was back in Kenya to get the real local feel over a few days at the first pitch contest in East Africa.

There’s a wise management adage “think global, act local” – this best describes the overall event – the conference ranked high in organization and execution amongst some of the best tech pitch events I have seen in Silicon Valley – indeed, many participants from around the world as far as Nicaragua said such an event does not yet exist in their countries. This is a key achievement for the East Africa ICT sector and the Kenyan community in particular. The space at Ole Sereni was ideal, the WiFi worked most of the time, journalists were thoughtful and professional and most of all the entrepreneurs pitching rose to the challenge. Investors came as far away as Texas, USA.

The event had a global feel yet also had a local focus – every single mobile application pitched was either solving a real East African need or was a tailored local version  (in stark contrast to startups currently getting funded in Silicon Valley and locking up talent). For example,  I loved the NikoHapa.com location based checkin service – on the surface it looks like a foursquare clone – but actually the tweaks are very relevant to East Africa – for one, feature phone owners can check in using SMS (given low smartphone penetration currently) and loyalty schemes with the merchant are built in from the beginning – the demo with Peet’s coffee at the event worked brilliantly – clearly the team were thoughtful about their piloting efforts. 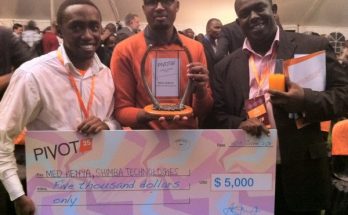