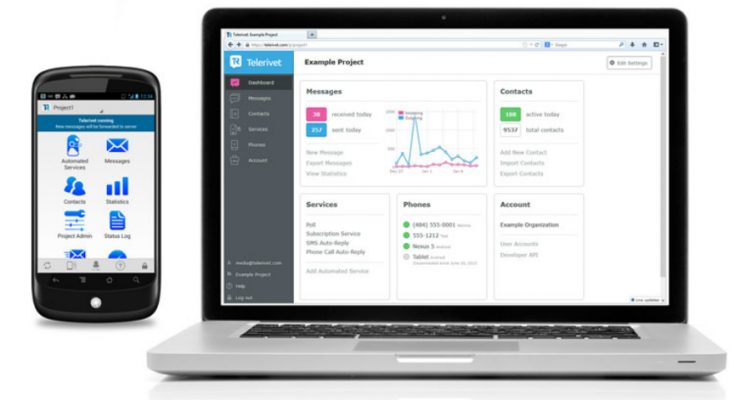 Most web and mobile startups in Africa need to have to some sort of messaging or notification layer that incorporates SMS. Wider businesses, large and small also too to communicate with customers . I have certainly blogged about the importance of SMS platforms for innovation in Africa. It is simply the best way to distribute information in Africa to the masses in the wake of feature phone dominance and lack of reliable internet access. Some whole startups and social ventures depend solely on it for reaching their audience in Africa. One could argue SMS is probably the most important mobile technology component on the continent at present, it has certainly had the biggest impact.

For something that is so important it can be incredibly hard to setup. SMS aggregators are quite active in Africa and they do very well on the whole, but the bar for anyone to get going is too high so they end up serving corporate clients and NGOs with big budgets who are more focused on marketing campaigns and notifying their current customers, some are certainly better than others, but there is a high commitment one must make to play in the space which discourages its wider use. Even then when dealing with an SMS aggregator, messaging delivery is not assured- you just can’t blast a 100,000 users whenever you want- you have to plan for it based on carrier capacity etc (atleast that is what one aggregator told me in Tanzania)… One of the major advantages of going with an aggregator is the cheaper per SMS pricing as you scale- but startups and many small businesses don’t need that scale to begin with. Another advantage of using an aggregator are the premium billing features to collect payments which then turn SMS into a revenue channel- but this has a lag in payout and the SMS aggregator often takes a big cut- nevertheless, when it set up correctly its a win:win:win for the client, aggregator and carriers. Finally there is the initial distribution, some aggregators have huge SMS mailing lists they can target based on their relationship with carriers and past clients engaged in mobile marketing. One has to wonder what will happen to these aggregators as the web and app stores become more ubiquitous across Africa.

The need for APIs and cross border flexibility

APIs are crucial, developers live and die on APIs (we all wish there was a robust M-PESA API!), so developers can build interesting applications for themselves or clients. But even SMS aggregators don’t really serve this well until to you pay to play – how can a developer with little capital create a working prototype, or do a proof of concept for a client? Even when you do get an API, some are not modern enough to play with the latest and greatest on the web. FrontlineSMS is typically the solution that comes to mind for some of these use cases, but that architecture, whilst it works for some, is overly dependent on using a laptop connected to a phone or stick modem as a hub vs remote automation. And whilst FrontlineSMS is certainly extensible, it only supports HTTP triggers out of the box and you have to be a pretty savvy developer to extend it. Enter infrastructure app services like Twilio and Tropo, which make it easy for developers to hack together SMS and other telephony apps quickly in a Software as a Service model- you get free credit and can rent a number starting at $1/month. The problem is that these services originating out of the US don’t translate well across borders especially in Africa. The web was built for global scale, telephony still has border bottlenecks and regulatory hurdles such as getting a local number- you have to strike deals with carriers and regulators around the world (harder to do in Africa) the same way SMS aggregators do (which have a local connection advantage), its still a way off until the global infrastructure telephony app services make a big splash in Africa, maybe they don’t see the potential right now compared to other markets where they have better connections such as India. So aside from FrontlineSMS, there is a clear market opportunity for commercial easy to set up SMS services that taps the creativity of local developers…

So like my last post on SMS- my prayers (and many startups) have been answered: Enter Telerivet, the team from Envaya decided to solve their own problem rather than rely on SMS aggregators, FrontlineSMS or Twilio which doesn’t do everything they need. Telerivet powers EnvayaSMS and they realized it was so important they decided to spin it out as a separate service and unleash it to the world.

FULL DISCLOSURE: I am advisor to Envaya and they are doing great work where I left off helping the Tanzanian COSTECH incubator.

Telerivet takes a distributed approach like FrontlineSMS with a unique twist- by using an android phone with app as a remote relay of messages that talks to their servers- effectively circumventing the need to centralize and go through regulators and aggregators with the high setup costs and long time to setup. My friend at Twilio tells me this set up is what they use internally to test and develop their services. So instead you can get going with the price of an android phone ($100) which can handle 1000 messages an hour. Now this may sound “strange”- but actually its very smart… It challenges the FrontlineSMS model, as this approach does not require laptop, but pushes the capability into the smartphone and back to server-removing the need for a laptop- the rest can be controlled from the web. But there’s more… Think of the android phone as a “mobile SMS server” on increasingly commodity hardware and software, with the advantages that it has a battery (important in many parts of Africa) and can connect over 2/3G and Wifi. Just lock it in a secure location with reception and simcard of your choice. The phone can go on as long as 3 days before it needs charging- heck if its that mission critical, attach a solar charging unit to it. One big advantage is being able to control the phone remotely to add airtime to it at will and even enable it to accept mobile money via USSD commands- I will leave readers to their imagination of what this enables you to do.

I coded a simple app in less than 20 mins- their API supports modern languages, the team created easy code examples in PHP, python, ruby and curl…. They support modern web services including REST and the ever popular web hooks. Basically, Telerivet is built with developers in mind and for local and internationally minded communities and organizations- dramatically lowering the bar to get up and running. When I talked to Joshua Stern this week, a founder, he mentioned many organizations are taking a look and switching over. But really this is absolutely what startups need and is an example of a textbook disruptive service that applies to the African context as recently explained by Will.

By using android phones as message relays, it cuts out needing to work aggregator and dealing with regulators for startups that are innovating on SMS. Not a developer? Not a problem! Their rules bases system allows anyone to create rules to direct messages with their wizard- it is really easy. As a “SMS mobile server”. You can connect any number of these phones- why not choose different networks to take advantage of better reception, SMS rates and internet deals? You get redundancy and modest quick scaling, you can also increase the number of SMS you can send with each phone. What is Google’s infamous server farms but a collection of commodity components in a huge farm? Or Commodity Computing. Why not buy 10 Android phones for $1000 and set up a small “Distributed SMS mobile server data center” and be able to send 10,000 messages/hr? Or 87M messages a year? Of course the downside is the cost per message with this approach- but you can scale it up as needed- a sort of “private cloud model” until you are ready for other solutions- but you may never want to go a centralized model again if it works and you have full control. For example- Afrinnovator is built on WordPress, which is a PHP stack- we could easily just connect up the newsletter signup via SMS now by simply adding the webhooks plugin and write a script to handle the interaction- or some other variation. We could get an android phone for Kenyan subscribers and a US number (via twilio) for US subscribers. I tested this with Twilio ($1/month + $30 credit), since I didn’t want to dedicate my android phone just yet as I am not currently in Africa. Telerivet is trying to make it really easy for developers and non developers alike to not recreate the wheel and create standard packs that can be easily configured on the web for common components, similar to how wordpress works with themes and plugins. Also on the Android app side you can download versions of the app that are expansion packs that can do things like access the USSD commands allowing you to do the remote access of the phone airtime or even mobile money. For example, they are working on automating USSD commands for Airtel Money and MTN, so you could deposit mobile money directly into a normal bank account. Already startups can use Telerivet’s API to accept mobile payments from customers in their app so they can easily charge for their services…The telerivet team clearly don’t just want to only deal with SMS only. There are so many use cases for anyone I could go on forever. If you can dream it, you can now build it…

How does Telerivet stack up against other options? No one solution is perfect right? The table below helped me layout and assess the different options- feedback welcome, lets make this table useful for everyone building SMS in Africa! Word of warning to Developers: Please be careful that you don’t end up creating spam for African consumers. Have clear optin and optout policies to respect privacy. The last thing we want is to become almost like India, where SMS became a spam channel and the regulators had to step in. It hurts everyone.